Here are 7 Feminist Anime that Sophia Marshall has seen and that you should probably watch too.

Like a lot of comic book nerds, I’ve been watching anime and reading manga since I was thirteen years old. Since then, I’ve found most of it is written using ‘stock characters’, whose personalities and ‘types’ are heavily gendered. The world of anime and manga can seem rife with crying girls, arranged marriages, and fan-service scenes where clothes just happen to fall off during battle. However, there are a few series that avoid these tropes, presenting audiences with interesting, vibrant women-and-other-oppressed-gender characters. Though they may not always exhibit ‘perfect feminism’, these are the series that prompt discussion about feminist ideas. Here are some of those anime – tried and tested by yours truly – that may be worth staying inside for over summer:

Michiko escapes from a supposedly inescapable prison fortress, while Hatchin is a girl fleeing her abusive foster family. The two join forces on a road trip to freedom. It is Michiko who starts out as the archetype of ‘strong woman character’, as she defies both the law and the power-hungry men around her; we begin to see her more vulnerable side throughout, as the truth about the past she is searching for begins to surface. A very interesting anime that questions morality through exciting action. The two eponymous roles are portrayed by noted Japanese film actresses Yōko Maki (The Grudge) and Suzuka Ohgo (Memoirs of a Geisha) but there is also a pretty good English dub too. The story takes place in the fictional country of Diamandra, making this anime one that celebrates cultural and racial diversity, as the country appears to have no indigenous race, and is fairly multicultural- though its landscapes take inspiration from South America. Other favourable qualities of the show include the fact that it is one of few that has a black woman as the protagonist, and that it is a true tale of friendship between women, as Michiko and Hatchin’s turbulent relationship grows more sisterly as the story progresses.

Although the lead characters are straight white males, there is a lot going on in this anime to do with gender, race and politics – set in a fantasy world based on twentieth-century Europe. Exceptionally well written, this is considered mangaka Hiromu Arakawa’s magnus opus, as it is one of the best-selling manga ever, having sold over 70 million volumes worldwide. Full Metal Alchemist does not ignore the realities of women living under a patriarchal dictatorship, as many of its women characters find themselves acting as assistants, love-interests or foils to their male counterparts. However, they each have stories in their own right. Particular one to watch: Olivier Marie Armstrong, the head of the ‘Northern Wall of Briggs’ (its literally just like Brienne of Tarth overseeing the Wall from Game of Thrones). She is a woman who decides to totally disregard gender, race and class amongst her soldiers, treating them as competent equals, as well as demanding a certain level of respect for her authority. She is one of the many women characters in this anime worth watching.

Kaichowa Maid Sama! (The Class President is a Maid!), PG-13

Kaichowa Maid Sama! is the story of a hardworking ‘Type A’ student named Misaki who dominates her mostly-male school as the Student Council President. Always looking out for the female minority and a master of martial arts, by day Misaki is the embodiment of ‘independent woman’. This independent woman also makes her own money too, but as her popular classmate Usui Takumi finds out, she does so by working after school in a maid cosplay café, where she must greet her (mainly male) customers by addressing them as ‘master’. Trouble ensues as Misaki fights to keep her job a secret from her peers, fearing it would undermine her authority as a student leader. This is a light anime that briefly touches on issues surrounding gender relations, femininity and culture: In one episode, Misaki is stalked by one of her customers, but before Usui can come to the rescue, she fights her attackers off herself. In another, she meets a cross-dressing boy named Aoi, who loves wearing the ‘kawaii’ fashion of the maid-cosplay-culture, proving ‘femininity’ is a fluid concept. It is not a deep discussion, but quite forward-thinking for a manga published nearly fifteen years ago.

Some of the toughest femme fatales in anime will grace your screen if you watch Black Lagoon. Revy ‘Two-Hands’, the gun-slinging, whiskey-downing, mercenary woman is one of the leads, who teaches her male colleagues a lot about survival in the criminal underworld. The crew work for Sofiya Pavlovna, also known as Balalaika, a woman who has probably seen and done it all. She was previously a captain in the Soviet Army, served in Afghanistan, and was brought up by her grandfather, head of the USSR military. As a result, she rules her crime-syndicate with a very firm hand. She also edits and distributes hardcore pornography, so her feminist morale is questionable, but then again, her moral compass never points north. Nonetheless, it’s great to see a woman succeeding in the male-dominated profession of ‘mob-boss’. 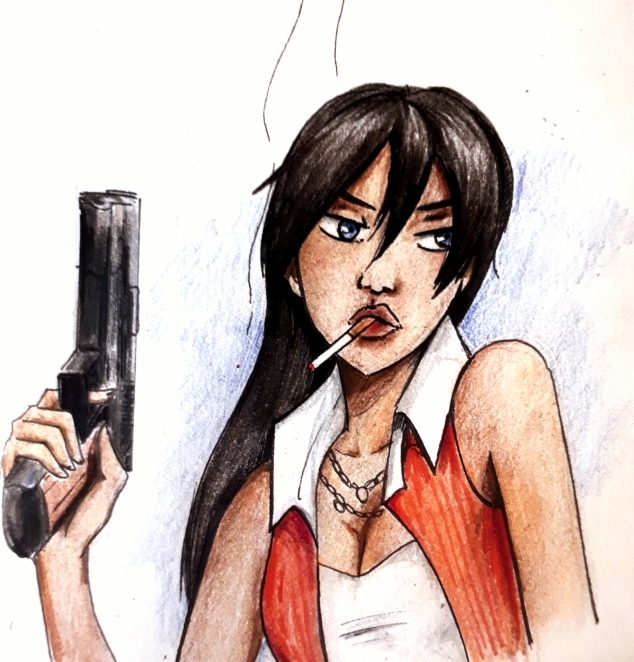 This is one of the stranger shows on the list, but the infamous lead-girl Gasai Yuno is highly intelligent and physically strong – traits that give her the advantage when she finds herself thrown into a blood-thirsty game of kill-or-be-killed, and helps her to protect her cowardly boyfriend, Yuki. Yet looking at this character as a feminist representation of women in anime is controversial: though Yuno protects Yuki, she also outright abuses him. This is a series that points to the fact that statistically, 1 in 6 men will experience an abusive relationship in their lifetime, showing that truly feminist writing isn’t always about creating heroines to look up to, but characters who are complex, regardless of gender. Yuno is one of several complicated anti-heroines featured in this series. Uryuu Mienne, ‘the terrorist’ is another; she resolves to reject a life of marriage and children for as long as she can – until of course, she falls in love, at which point we see her battling the choices that many modern women face: to fight the system, or stay at home and raise a family? Or do both in an alternate timeline? (Warning: This anime is nuts)

Clearly, the writer of this article has a taste for violence. I watched this film as a minor and it taught me to have more respect for age-ratings. It is based on the novel Pāfekuto Burū: Kanzen Hentai by Yoshikazu Takeuchi, in which a pop-idol named Mima decides to become a serious actress, and finds both her body and mind are no longer completely her own. Susan Napier uses feminist film theory in her analysis of this anime, stating that, “Perfect Blue announces its preoccupation with perception, identity, voyeurism and performance – especially in relation to the female – right from its opening sequence. The perception of reality cannot be trusted, with the visual set up only to not be reality, especially as the psychodrama heights towards the climax.” This is a film that roots itself in the core of female fear. There are many uncomfortable scenes in this one, so handle with care.

What would a list about anime be without a Studio Ghibli film? Princess Mononoke is an eco-film, in which San, a girl raised by wolf-gods, fights to protect the forest from Lady Eboshi, who mines for iron there as she manufacturers firearms in the local town.
Though it becomes quite apparent whose side we are meant to be on, more critical members of the audience will note that the contrast between these two women isn’t simply a case of ‘good/evil’ or ‘angel/demon’. Mononoke and Lady Eboshi are more alike than they first appear: both have loved ones they wish to protect, and both are resilient women who believe they are fighting for the greater good; San protects the forest and its resident gods, yet Eboshi ensures the economic survival of her town, which has a high population of social outcasts, including lepers and refugees. Theirs is not a fight for control, but for co-existence, as it can be argued that both sides have a right to the resources in their environment. If that sounds familiar, just think of the feminist movement.