Yasmeen Thantrey shares her thoughts on the negative effects of positive discrimination at university.

Getting into college/sixth form was never an issue, I was somehow able to understand most of what was thrown at me during my GCSE’s, so 5 C’s was never a challenge. Problems with my grades began during A Levels, when the leap was something I thought I was going to miss. For the first time ever I felt stupid. But somehow I managed to pull my finger out and land myself in a really good university.

I was very lucky, I didn’t get the high A’s and B’s most people on my course did, so I assumed that I got let in due to the fact that I could write well, and formulate a convincing personal statement. Apparently, I am blind to my own ‘perks’ of being an ethnic minority. So many times, I have been told that I got into university to ‘tick a box’ and ‘fill a quota’. Whether these comments are light-hearted or not, they have an underlying bitterness that only adds to the racism that I have to face everyday. I am always still questioning; “Did I just get in because I am brown?”. Apparently, everyone else knew the answer before I did. 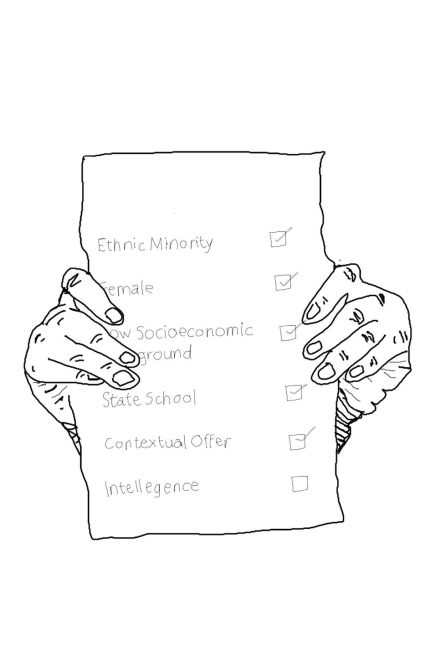 Is that what people think when I tell them I got into university? That my chances were increased because I am a minority? If this is so, then why are there still scandals today about admission bias? Is this ‘box ticking’ just a made up to justify a minority’s success? How can we simultaneously be discriminated against, whilst being let in because of our ethnicity?

I am sick of having to justify my own success because of my skin colour and roots. Even saying I didn’t disclose this information to the admissions office people will still find a way for me to have been given a ‘helping hand’. Looking for any excuse to explain why I am where I am, that doesn’t involve my intelligence and value.