Rosamund Pike’s coitus-stabbing is an unforgettable moment in modern cinema. Writing in Neil Patrick Harris’ blood, she not only slices his neck with a box-cutter, but finishes. Now that’s multitasking.

Gone Girl is one example of a truly chilling villain in contemporary cinema, performed by a woman. These parts are rare to come by when cinema in general is still a predominantly masculine-misogynistic playing field, and ‘women’s films’ are geared towards the lighter genres.

Gone Girl polarised audiences, being both celebrated for its unusual female roles, and abhorred as another damning piece of celluloid misogyny. Rosamund Pike portrays the male nightmare, a product of the patriarchy that rebels in a calculated, intricate and psychopathic gesture.

Gone Girl subverts the typical thriller genre, transcending convention as it transforms from a classic abduction mystery into a marital combat. Typically, the female characters in this genre are narrative enablers, ensuring the plot is in motion and standing neatly in the periphery. Here, the male characters plod the story along, and it’s the female villain that gratifyingly takes centre stage. 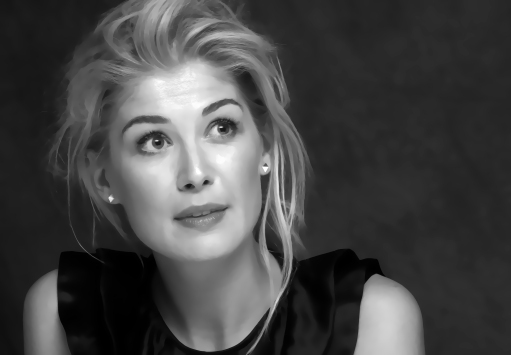 Rosamund Pike based her performance of Amy Dunne on two other iconic female villains of cinema. The obvious homage is to Sharon Stone’s sensual maniac in Basic Instinct. To Die For was another influence, Nicole Kidman’s blinkered ambition to be a weather girl resulting in adultery and murder. Neither of these characters are necessarily likeable: but do we need all women on screen to be likable?

A misconception in some strange of the feminist movement within modern cinema is that all female characters need to be strong, admirable role models. Of course, we need to see these types of women on screen. However, what is needed most, and what is still lacking, is variety. This is different from the call to see real women on screen. We do need to see real women on screen, desperately, but not all roles in cinema must necessarily demonstrate characters inextricable from reality. Catherine Trammel in Basic Instinct is entertaining and fascinating to watch, but I can hardly imagine meeting her at a dinner party.

This variety of female roles is beginning to be established in the thriller genre, almost in abundance. Under the Skin, although it is near to completely transcending genre categorisation, is a surrealist, guerrilla masterpiece heavily reliant upon the masterful lead performance of Scarlett Johansson: the fact that Jonathan Glazer cast an actress heavily sexualised by the press as a sexual predator was a canny move.

what is needed most, and what is still lacking, is variety

It was a similarly canny move which saw Rosamund Pike cast as a psychopathic villain. David Fincher, whose casting method seems to involve googling the actors and examining their character via photographs, claims he chose her because her image has a strange, ageless quality. The fact that she possesses the ability to look simultaneously older and younger than her genuine age is an unsettling feature of her character. She is both chilling in her cold superiority to her husband and terrifying in her childish unpredictability.

Hopefully this performance will elevate Rosamund Pike into a new realm and wealth of roles that no longer pigeon-hole her due to her gentle beauty, adherent to Hollywood convention. In light of this performance, I hope to see an abundance of multifaceted female roles dominate the genres regarded as masculine. The time has come for genre to evolve beyond archaic binary boundaries once and for all.