‘If every time a woman expresses her sexuality it is perceived as being for the male gaze, women will never be able to express their sexuality, except in the service of men’ – Sharon Marcus

Getting off, as a taste-conscious 21st century feminist with an unswerving sense of their own carefully styled aesthetic, and no wish to disrupt their social conscience, can be tricky. The profusion of differing variables that bar the quick route to mindless pleasure can be a buzz kill in its own right.

Ultimately, guilt should play no role in climax, unless invited into the fantasy itself. But unfortunately, no myth is being shattered when the incredible dearth of woman-centric erotica is discussed.

Works by Anaïs Nin, therefore, seem as rare as pearls in an oyster. Nin asserts the power of female sexuality and the intertwined sensuality of the experiences within the short stories that make up The Delta of Venus. Nowhere but their pages is a woman’s lust articulated with such single-mindedness, married with the high-style of European sensualist authors, such as Gabriele D’Annunzio, and completely unselfconscious language.

‘Write yourself. Your body must be heard.’

More than a breath of fresh air, Nin’s work seems more like the door of a stifled, decaying villa being broken off its hinges. Rightly, this is hardly my discovery alone. Wrongly, it joins a collection of similar books by women that I could count on two hands and have thumbs spare.

And yet, literature that finds its foundations in explorations of sensuality should be, organically, second nature to women writers, as cited in The Laugh of the Medusa, the seminal 1975 essay by Hélène Cixous. The essay is a call to arms, wherein Cixous urges the woman author of the future to ‘Write yourself. Your body must be heard.’ If women must produce bodily writing, it must encompass all of the body, and all of the body’s functions.

If Nin chooses to write her body, the 21st century equivalent of this could be seen to have a greater emphasis on performance, and the use of the female body to further illuminate artistic process. In an era where celebrity is not just multi-faceted but engulfing, the performance isn’t just focused on the music and lyrics, but the persona constructed on the back of it.

For artists such as Beyoncé, Nicki Minaj and Rihanna, the ‘art’ never stops, shape shifting to revolve around their sex lives to their predilection for crop tops, as representative of the woman as any of the EPs.

‘Cutting up a metaphorical dick onscreen [in the form of a banana, in 1950s style kitchen] makes it even more clear that the Anaconda video is about Nicki asserting her power’

In the 21st century, it remains to be seen whether a female celebrity’s body has its own autonomy, or whether that lies in the hands of the press, and the sexual content of the music, married with so-called ‘raunchy’ performances, of female artists is attacked even within various chapters within the feminist movement as damaging to the cause.

Manifest as what my friend dubs ‘put-a-cardi-on-feminism’ (a perfect smirk of a phrase, in that the only people still calling them ‘cards’ make up the bulk of my mother’s social circle), this under-the-skin internalised misogyny – often what Moya Bailey dubbed ‘misogynoir’ – whereby the universal sexualisation of women comes like a hit and run, robbing the victims of their subjectivity.

It is all too easy to decry self-conscious performances that undoubtedly rely on an open discussion of sex as unnecessary and even counter-productive to the so-called feminist cause. This perpetuates the idea that decisions regarding sexuality and sexualised performances are brainless vehicles for self-promoting stars and that lone, further reiterating the problem society has with debating ownership of the idea of female sensuality.

One of the ways in which the problematic dichotomy between performing for the male gaze versus performing for the sake of the self has been addressed by female artists is through the idea of the nuances between sexual objectivity and sexual subjectivity. Echoing Cixous, an understanding of the body influencing her work, Nicki Minaj plays with these roles in the music video for Anaconda, subverting pre-existing notions of the female form and its ownership.

As Molly Lambert in an article for Grantland states: ‘Cutting up a metaphorical dick onscreen [in the form of a banana, in 1950s style kitchen] makes it even more clear that the Anaconda video is about Nicki asserting her power, not as a sexual object but as a sexual subject. Both the suggestive choreography and the song’s lyrics, which recount a series of sexual encounters double down on the fact that Nicki has all the power here, and that she can show as much of her body as she likes and retain all that power.’

However, despite this assertion of power, not only over her own body but over those who she directs it towards, it is still contentious to some as to whether Minaj deserves the right to dictate what exists inside and outside the parameters of the male gaze – as if it was removed from the inherent nature of being a living, breathing woman.

Nin’s writing displays the body in a close up, with stories such as Mathilde stunning the reader with frank and stylised descriptions of self-onanism that respond to the female reader’s inner desire to acknowledge her sensuality outside a male sphere. In this, Nin is allowed a sort of detachment, a creation of a female sphere where pleasure can be unmolested by those critics looking to manipulate the book’s experiences for its readers. 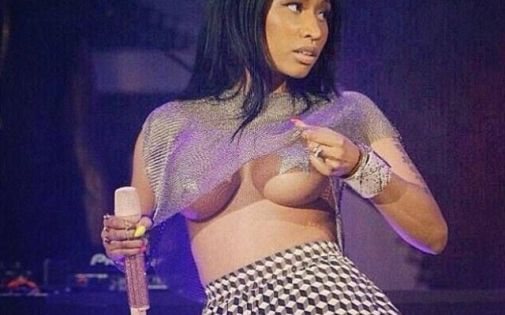 By contrast, the scrutiny and subsequent vitriol placed on these overtly sexual performances, such as with Anaconda, interferes wit the intentions of the artist and can tarnish the work they create. Instead, stripping off and sexually explicit lyrics are cited as ‘dumbing down’ culture, as if sex can only exist as a subject matter in high art, where it can only disturb crumbling intellectuals.

Rather than seemingly denigrating culture, a heightened sense of the power of female sexuality at the fore of the music industry can allow for the reclamation of the female sexual experience, as its demonisation only forces the idea of sexually active women for the sake of themselves, rather than men, back into the obscure and the repulsive. One of the ways in which this can be examined is by looking to the target audiences of some of the artists.

In the case of Beyoncé, most of the detractors are male, but Beyoncé seeks a female audience to relay to female experiences. Through this thought, we begin to see her ‘through the historical lens of feminist performance art, which is not staged for the male gaze, but rather attempts to explore the relationship between that gaze, female bodies and female fantasies’ (N. Berlatsky, Pacific Standard), suggesting that we can seek to find ourselves within the performance as a way of acting out our feminine fantasies through another, the ‘female gaze’ finding roots in understanding and discussion.

The degradation of female sensuality can be found on any current affairs or opinion websites, in the works of critics, and seeks to overtake any comment on the woman-authored work in any form it may take. By accepting discussion of sex and its relation to the woman’s body, perhaps the feminism of white privilege can accept the importance of a woman’s place in creating her own narrative.