Serafina Lee and Natasha Nuthall discuss the lack of women in STEM subjects.

If you are a woman undertaking a STEM subject, do you feel like a rare species in your lectures? Treated like a novelty and faced by countless replies of ‘oh really?” when you tell people you are in fact studying maths? Imbalance in university courses has been a longstanding problem, despite the fact that there are more women than men currently attending university. So, with more opportunities for women to study subjects such as maths and engineering, why is female enrolment on these courses so lacking?

Generally, 90% of students on nursing courses are women, whereas subjects still seen to be traditionally ‘for men’ are severely imbalanced, such as engineering and some sciences. It is estimated that within engineering especially, only 15% of students on the course are women. Perhaps the reason for this remaining gender imbalance is due to the fixation upon gender when regarding women who pursue STEM career fields. Marie Curie is renowned not for her discovery of radium and polonium, but because she was a female scientist. This unnecessary fixation on gender may push women away from STEM subjects as they don’t want to feel like ‘the other’ in the classroom. One biomedical science student noted that she has already been asked for the ‘woman’s perspective’ regarding topics within the course. “Since when did scientific knowledge become gendered?”

Women choose their subjects for themselves, so how then can we pick apart the underlying reasons and social pressures that influence their decision? Trying to avoid an endless circle of psychoanalysis, part of the problem could be quite simple; there is a dangerous lack of representation for women in the ‘upper echelons’ of STEM-based careers. Women only make up 24% of all people working in STEM in the UK. We have over-saturated male representation, which feeds the impression of exclusivity, making it all the more daunting to embark upon a career within such a male-based inner circle. However, that’s not to say that the higher rate of representation for women is the reason why arts subjects are primarily dominated by women. It is a universal issue across all academic areas. For example, the English literature syllabus even at university level is deeply rooted in the study of integral male figures that are seemingly synonymous with British identity and culture. 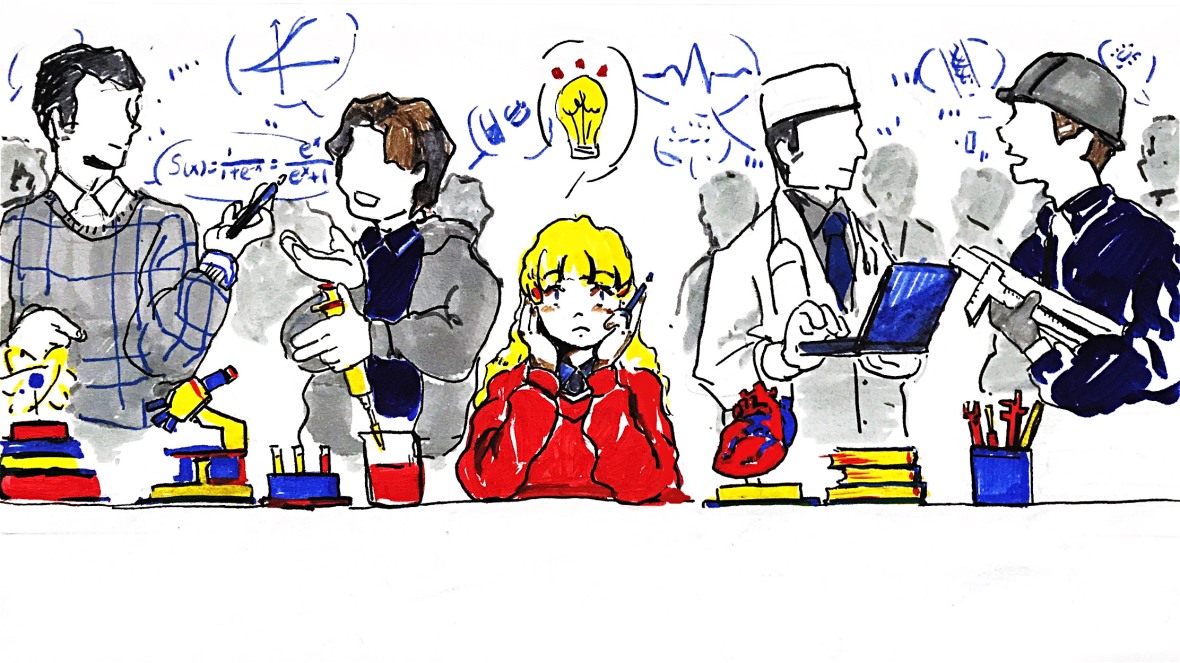 In an article by Farah Joan Fard discussing the lack of exposure for women artists, she points out how despite taking up 60-75% of those studying art at university, women artists rarely make up more than 30% of artists exhibited in galleries. So, clearly, lack of opportunity and representation is prevalent within all areas. Yet more women still choose it, despite this gulf in representation. Why then should arts be more acceptable for a woman to undertake than STEM? In a broader way, underlying sexist expectations and gender roles are to blame. This type of sexism is not glaringly obvious – male lecturers do not stand outside theatres, holding up “NO GIRLS ALLOWED” posters and snarling at any women who have the audacity to gain an education. This sexism is structural and institutionalised; deeply rooted, therefore all the more difficult to confront and deconstruct. It presents itself in gendered notions of intelligence at a very young age, such as the emphasis on boys to achieve greatness and fulfil potential, and for girls to accommodate. Feminist Ann Oakley coined the term ‘canalisation’ when regarding the subtle forms by which parents encourage their children’s hobbies and interests to suit traditional gender roles. To refrain from buying one’s daughter a toy chemistry set because “that’s for boys only!” is to perpetuate the notion that girls who choose to pursue scientific subjects are “strange”, and prepares them for a lifetime of othering both within and beyond the academic world.

While we are (thankfully) making some progress regarding the treatment of women in society – the emergence of the #metoo movement, for example – we still have a long way to go. It’s a shame that, despite efforts to encourage women’s participation in STEM subject fields, there is still some resistance against this inclusion. Whether it’s due to lack of opportunity, ingrained societal expectations, or unnecessary focus upon gender, we know that things need to change. But how? By collectively undertaking rapid progress for gender equality, and achieving the long-term goal of an equitable and gender balanced society, such as Norway or Sweden, where the maths gap has disappeared, then there might be some hope in ending this rift between subjects. We need more schemes to encourage women as role models in STEM careers, to celebrate women’s success due to merit, not treating them as outsiders in an exclusively male field. But as it stands now, the social norms that influence women to choose a subject that is more lenient on their presence might be at the root of the divide.