Emilia Andrews debates whether the pursuit of women is always romantic. From TWSS issue 15.

It’s a common trope in books, films and TV shows that women are pursued by men out of
romance – think Ted and his blue horn throughout the nine season-long pursuit of Robin in ‘How I Met Your Mother’. It tends to go a little like this: man asks woman out, woman says no, man continues to pester woman until she eventually says yes, as she is so wooed by his relentless advances and grand romantic gestures. There are times when the commitment shown by this can be considered romantic, but this is situational and dependent on how the person being pursued actually feels. Of course, this idea of man-pursues-woman primarily applies to heterosexual couplings, and the dynamic is likely to vary in LGBT+ relationships, but the notion itself remains extremely prevalent in our culture and inevitably feeds into our ideas about the dating world.

From an evolutionary perspective, it makes sense that a man would need to pursue a
woman in order to prove his worth and demonstrate his commitment. Like a peacock
flashing its feathers, a man would have to prove that he had the desirable traits that would make him a good breadwinner for any children he may potentially father. In a world before contraception and more liberal ideas about single motherhood, a woman had to be certain that the person she was entering into a sexual relationship with was going to stick around, so she wouldn’t be left to care for his child alone. The problem with this argument is that it doesn’t apply to our modern dating world, in which one night stands and the rise of casual relationships differ from the evolutionary objective of finding a mate who will father your children and provide for your family.

The predatory culture of pursuit is particularly prevalent in nightlife, wherein a woman is expected to stand or dance in a sultry fashion, waiting for a man to come to her. The pack culture which some men subscribe to – in particular, going out ‘on the prowl’ – imagines the primary objective as men finding and pursuing women. It is rarely considered that a woman might want to approach a man she is interested in, and instead, she is expected to be flattered by any man’s attention. This outdated idea prevents women from having the confidence to actively seek their own desires and is telling of the wider landscape of gender roles, which still largely dictate that men are expected to be ambitious and do anything to obtain what they want, while women are expected to be more hesitant, and remain ‘in their place’. 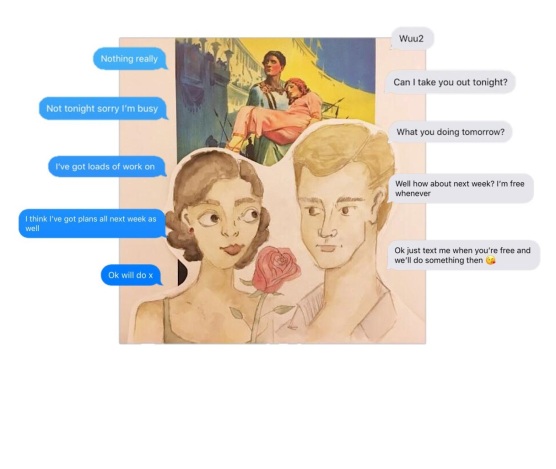 Admittedly, there are times when men are perceived as being ‘creepy’ for continually
attempting to obtain a woman’s affection, but often, society views men who pursue women as ‘romantic’. Meanwhile, a woman who pursues a man is often viewed as ‘crazy’. This, again, is evidence of society’s expectation that women should be level-headed at all times, while men are allowed to think with their libidos, and are considered romantic if they act from the heart – even if their hearts desires are entirely unrequited. Either situation, whether it is the man or the woman repeatedly going after somebody who is clearly uninterested, can be regarded as being more predatory than romantic. There is no romance in the pursuit of a person who clearly does not want to be pursued.

Then there comes the much-asked question, ‘is she just being coy, or does she actually want this man to stop pestering her?’ Maybe the fact that this needs to be asked in the first place reveals more about the way in which society values how women feel. When pursuit in the name of ‘romance’ is prioritised over how comfortable the other person feels, boundaries are crossed. This relates to the ‘non-verbal cues’ which were described in the Aziz Ansari story; even if somebody doesn’t explicitly tell a person to go away, the message is still present and should be respected.

This is not to say that men should never go up to women and start talking to them. If people didn’t talk to one another, the possibility of people entering into new relationships – both romantic and platonic – would be dramatically reduced. As with any human interaction, men just have to be aware of how the person they are talking to feels about the interaction and know when to back off – i.e. when the other person appears uncomfortable. If the other person is interested in continuing the interaction, that is normally clear enough to see. Women also need to be made to feel not only that is it okay to say ‘no’ to somebody who approaches them if they are uninterested, but also that they can be comfortable with pursuing what they want, too. ‘Romance’ doesn’t always have to be a case of ‘man goes up to a woman’ – instead, it can be a woman actively attempting to fulfil her own desires, while both sides respect one another’s reaction to the interaction.