He opened the blinds. Light filled the room.

It was a beautiful Tuesday morning, and the bright summer elevated his mood. Today he would be posting his work to be displayed in the City Gallery, which was quite an honour for someone so young. His name was all the rage after he’d received the highest degree of recognition from the university. He had been praised by all the local papers for his brilliant art scene debut.

But now he felt uneasy. He was meant to be boxing up his canvas to be posted – except he couldn’t look at his painting anymore. Not after the nightmares about it. He had dreamt of two hands coming from behind and grabbing his neck, slowly squeezing out his last breath as he helplessly clutched his paintbrush. He had woken up restless, suffocating in the bed sheets.

But it had been worth it. He had what he wanted, didn’t he? And so what if he was feeling a little guilty now? She wasn’t around to … oh, it didn’t matter now.

He had what he wanted. He was losing sleep over nothing.

The slow week before the deadline of his crucial final piece submission was spent in the art studio, dabbing at a still-life of wild, sloppy roses, with red paint that hadn’t been mixed properly; it was as vivid as fresh blood. Once most of the other students had gone, the palettes and easels were left for the ghosts to use. All that was left was the astringent smell of paint that bothered his nose.

Although his paintbrush cut through a thick silence, he was not as alone as he would have liked to be. Just inches away, the loveliest girl from his class was perfecting her own masterpiece. Thin bars of light crept through the gaps in the blinds and made patterns in her long hair. To him, she looked like no ordinary girl, but the most precious songbird, captured in a cage of gold.

Tension lined her forehead as she frowned with concentration; it seemed the pressure of the deadline was crippling her. Looking over his shoulder, he examined her work with envy. It was clear that her labours had been fruitful – the painting was faultless.

The nude woman in the painting looked back at the man with sultry eyes. Her features were angelic; her thighs and breasts had been painted sensuously. She stood against a background of conflicting colour – a dozen streaks of blue meshed with bands of wedding white. He looked at his own flaming, crimson roses and sighed with irritation. 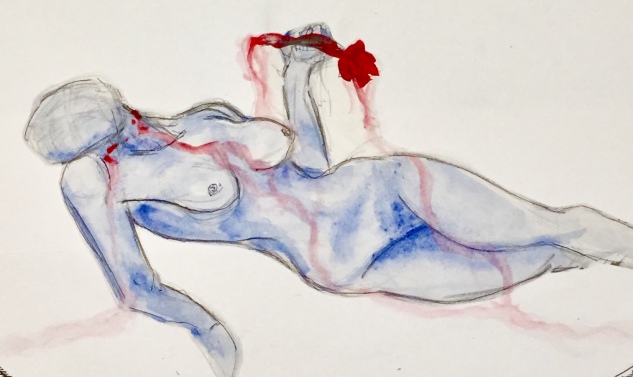 What he witnessed next was distressing. A dreadful sight. At his side, his neighbour had broken out into a sudden succession of violent coughs. The girl dropped her palette, her paintbrush and her poise. Her eyes widened with each convulsion. Was she about to vomit?

The coughs got deeper and louder, forcing her to bend forward until she was leaning over the table, using one arm to prop herself up. She didn’t answer.

“No seriously, are you okay?” He was worried now. He hadn’t seen anything like this before. Should he call an ambulance?

With one last hacking cough, she collapsed onto her chair with her eyes closed. The young man took a step back. At least she had stopped now. She was probably okay. It was probably nothing.

Seconds passed before his bravery allowed him to reach out for her wrist. She hadn’t moved at all. The classroom was quieter than it had been before and soaked in a sombre atmosphere. He shivered. He didn’t like the hush.

He held her wrist and searched for her pulse.

The nude painting stared at him. She was divine. He picked her up with both hands and felt the weight of her body in his arms. He dismantled his dying roses and stood them where she had previously sat.

He could barely see what he was doing: the dim light of the studio faded more as the evening darkened.

He immersed his brush in fathomless black ink and scrawled his name on the bottom left-hand corner.