TWSS interviews student illustrator Maegan. Her artist profile details her love for Frida Kahlo and how she is influenced by her mixed heritage.

Maegan is a first-year international student, reading Criminology here at the University of Bristol. Her illustrations have been featured in articles such as ‘Why consent classes are still important’, ‘Colour’ and ‘Star Trek and LGBT+ representation’.

How did you get into art?

In my last year of high school, I did Art as part of the IB (International Baccalaureate), and I guess I found what I wanted to do from research through this.

I really like canvas and acrylic. Once I tried gouache (a water based paint) and I really liked that so I might want to work with that again, but mainly painting.

How would you describe your artistic style?

I don’t know if I have a style – I really like florals, using a lot of bright colours and portraits as well. In my free time, I usually do portraits of girls. 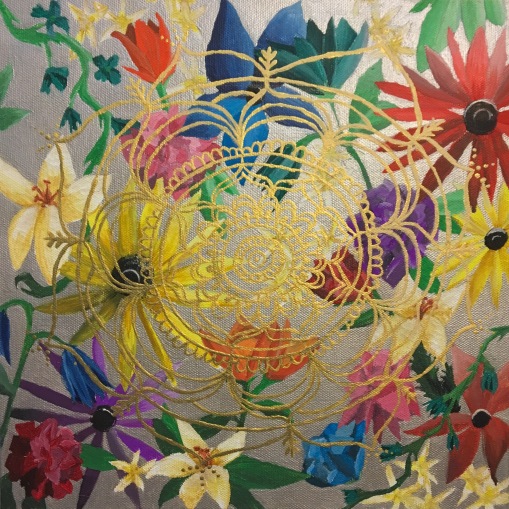 Do you have a favourite artist?

It’s so mainstream, haha, but Frida Kahlo – I actually have a Frida Kahlo tattoo! It’s the one of the wounded deer. I love the symbolism in her work, everything has a meaning. She did a painting about her mixed heritage and how she found it hard to reconcile both cultures in her life, which is something I really identify with: the whole idea of representing both sides, the culture of her mother and her father alongside each other. Also, she’s not shy of controversy and painting the naked figure, which for her time was super revolutionary. It’s really nice to see that.

What was your favourite project with TWSS?

If you could do a portrait of an iconic woman of your choice, who would it be?

All that comes to mind is Anne Boleyn! She totally used her body to get what she wanted, and in that time it may have been all that she could do as a woman. She changed the whole church system in England. It’s so dark, haha, but the way that she manipulated Henry VIII was great. She knew what she had to use and she used it.

What’s your experience as a woman of colour here at the University of Bristol?

I grew up with my Singapore-Indian side of the family, so I do strongly identify as a woman of colour. In halls, you’re always talking to people from different places, and I have some friends who share my experience as someone of mixed heritage.

The issues I have with my identity have been complicated. When people ask where you’re from I feel like the question they’re really asking is ‘why are you brown?’ so I feel like I need to say Singapore when I identify also with my English side. A lot of people seem to find it hard to understand that you’re from two places; they want to put you into one box. I’m from two places and I don’t know why people find it hard to understand!

Does this influence your art?

Yes, this definitely feeds into my art. I prefer to paint women of colour because I grew up around them and feel like I know them more. When I painted the illustration for issue 14 of the Indian and Pakistani women I made sure to message my Pakistani friend for some pictures and tips so I could do it justice. 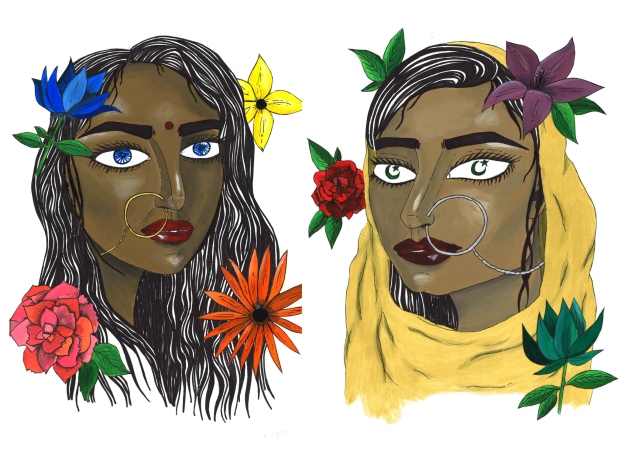