Seun Matiluko, University of Bristol’s BME Officer, discusses why Black History Month is so important in challenging the predominantly white narrative that continues to shape our curriculum.

In UK academia, our curriculums are often whitewashed with many students never hearing of Black contributions which have shaped our world today. If Black contributions are highlighted, it often begins and ends solely with the narrative of slavery and colonization, both of which are looked at through a European gaze. The 2011 NUS Report, Race for Equality, found that 42% of students felt that their curriculum did not reflect issues of diversity, equality and discrimination. The same report found that 33% of Black students felt that they could not bring their own perspective, as a Black student, to their lectures and tutorials. This may also speak towards the root causes of BME attainment gap, in which 57.1% of  UK-domiciled  BME students received a top degree, compared with 73.2% of White British students in 2012/13. Black History Month allows us to take part in the decolonization of our curriculums, by truly learning about, and becoming inspired by Black achievement. One day Black History will be readily taught as part of a wider curriculum, but whilst it is not, it is imperative that we celebrate Black History Month.

Black History Month seems even more necessary this year with the rise of the Black Lives Matter movement in both the United States and the United Kingdom. In this year alone at least 194 black people have been killed by the police in the US. From 1990-2015,  there were 157 BME deaths in police custody or otherwise following contact with the police.  Only 9 of these deaths resulted in an unlawful killing verdict being returned by the jury. In the US almost all of the 22 trans people killed this year were Black trans women. Often the injustices that Black LGBTQ+ people face are erased from our society, and we are proud to be showing the film Pay it No Mind, a documentary on Marsha P Johnson, a black transwoman who was a key figure in the Stonewall riots. 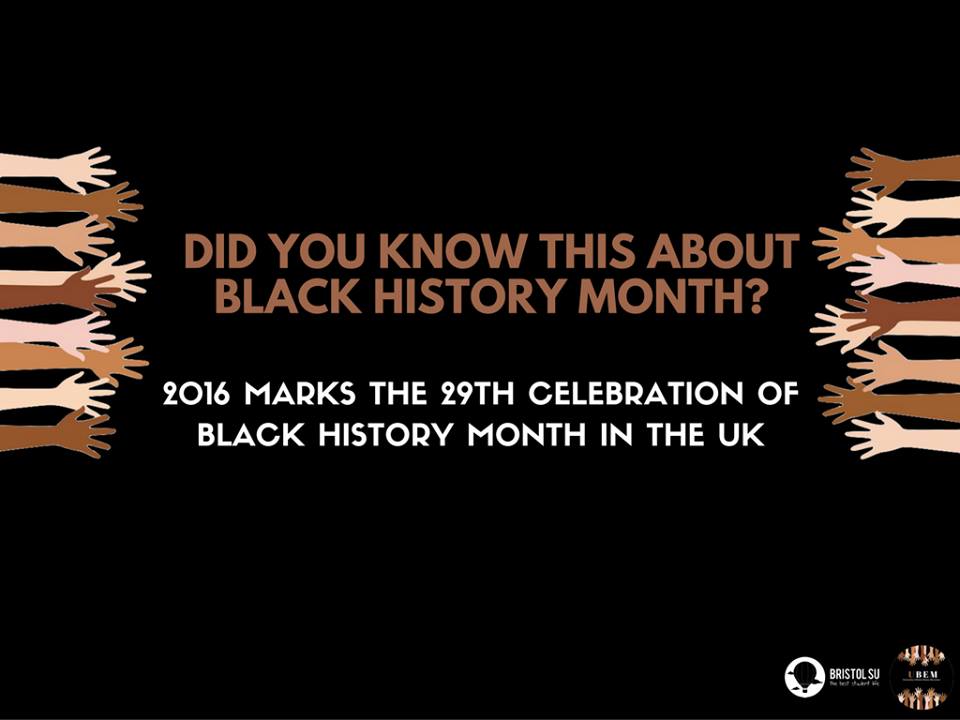 Following our Keynote speech from NUS Black Students’ Officer, Aadam Muuse, we have hosted: panel discussions, the aforementioned film screening and a presentation by internationally renowned musician and historian Akala. We finished our Black History Month events on the 29th October with a showcase of Black student talent. Black History is certainly not limited to a month and after October we implore you to research how Black people of the past, present and future have and will affect the world around you.