Despite the international social media campaign and protest, ‘Bring Back Our Girls’, two hundred and nineteen of the children are still in captivity and most of the world appears to have forgotten. Whilst the campaign in Nigeria itself continues, the rise and fall of #BringBackOurGirls in the West is striking. What does this say about hashtag activism? Does this promote global feminist solidarity? Or does it undermine any meaningful change?

Nigerian lawyer Ibrahim Abdullahi came up with #BringBackOurGirls after hearing the phrase in a speech by the former World Bank Vice President Oby Ezekwesili on the 23rd April 2014. The campaign was initially based in Nigeria, putting pressure on Goodluck Jonathan’s government to find and return the schoolgirls safely. But by May, #BringBackOurGirls had attracted world-wide attention, with over one million mentions on social media. High-profile figures Michelle Obama and Malala Yousafzai and celebrities, from P. Diddy to Cara Delavigne, showed support.

“What happened in Nigeria was not an isolated incident. It’s a story we see every day as girls around the world risk their lives to pursue their ambitions.”

Many Western feminists encouraged others to stand in solidarity with the girls through the social media campaign, and organisations such as Girl Rising and Girl Up adopted the slogan. The campaign was shaped by a broader discussion about the education of girls and women in the developing world. Michelle Obama, giving the President’s weekly address, condemned the ‘grown men attempting to snuff out the aspirations of young girls.’  She stated ‘What happened in Nigeria was not an isolated incident. It’s a story we see every day as girls around the world risk their lives to pursue their ambitions.’

Similarly, Hillary Rodham Clinton tweeted ‘Access to education is a basic right & an unconscionable reason to target innocent girls.’ In the United Kingdom, women MPs from all parties gathered outside of the Houses of Parliament. Their message was to stand with women world-wide and condemn attempts to restrict girls’ education.

Clearly, the social media campaign was the fastest way of publicising the issue around the world and putting a spotlight on the response of the Nigerian government. Before the campaign, there was criticism that the Western media did not take this story seriously because the kidnapping took place in Africa. #BringBackOurGirls forced governments to put this on the agenda, with world leaders from the US, France, China, Canada and the UK pledging assistance. It is unlikely that this would have happened without social media.

But for some, #BringBackOurGirls was merely another form of ‘slacktivism’, where the activist does not demonstrate any real commitment and liking a page is the biggest form of protest. Comparisons were drawn with #Kony2012, as many argued that the hashtag reduced a complex conflict in Northern Nigeria to a sound bite. Nigerian-American writer Teju Cole tweeted ‘Remember: #BringBackOurGirls, a vital moment for Nigerian democracy, is not the same as #BringBackOurGirls, a wave of global sentimentality.’ The latter had little impact in any tangible sense. Most of the girls are still missing and western advocates for the cause simply gave up. As Jumoke Balogun wrote, ‘Dear world, your hashtags won’t #BringBackOurGirls.’ 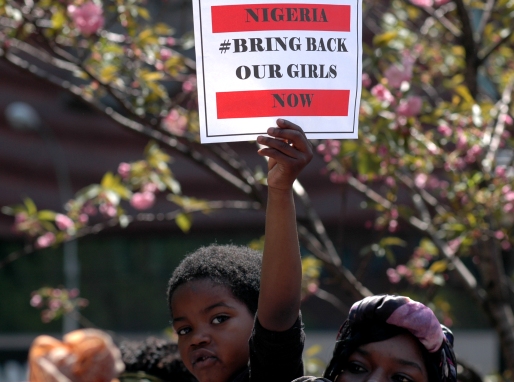 Western feminists were criticised for appropriating the Nigerian movement. One blog post described this as the ‘politics of pity’, with images displaying westerners with sad-faces rather than the actual mothers of the children in Nigeria fighting for action. The writer, Kasey, argues that in this campaign the focus shifted from the Nigerian schoolgirls to ‘self-congratulatory’ celebrities. The use of ‘our girls’ outside of Nigeria was also problematic. In her book Feminism Without Borders, Chandra Talpade Mohanty discussed ambiguous statements of sisterhood and images of ‘identification with the other’. This could divert attention away from racial inequalities and the broader structural causes of gender-based violence.

‘200 girls are missing in Nigeria- so why doesn’t anybody care?’ The same could be said one year later.

I wrote an article about feminism and the internet for this magazine in early 2013. A lot has changed since then. The ‘Bring Back Our Girls’ campaign is testament to the power of the internet as a resource for spreading feminist human rights campaigns around the world. Social media could be one of the only ways to show support for the original movement without interfering too much. Western feminists could use hashtags to celebrate the efforts of Nigerian feminists fighting for women’s rights to education.

But the danger is that the global campaign ended as quickly as it started. Perhaps people lost interest once they realised that there was no quick fix. An ITN report from February 2015 shows a handful of ‘Bring Back Our Girls’ campaigners meeting every day in Abuja, Nigeria. They say, if they didn’t protest every day, the missing girls would be forgotten. Before the social media explosion, Anne Perkins of the Guardian wrote an article about the Chibok schoolgirls. She asked ‘200 girls are missing in Nigeria- so why doesn’t anybody care?’ The same could be said one year later.

For more information and ways to support the campaign, visit: http://bringbackourgirls.us/